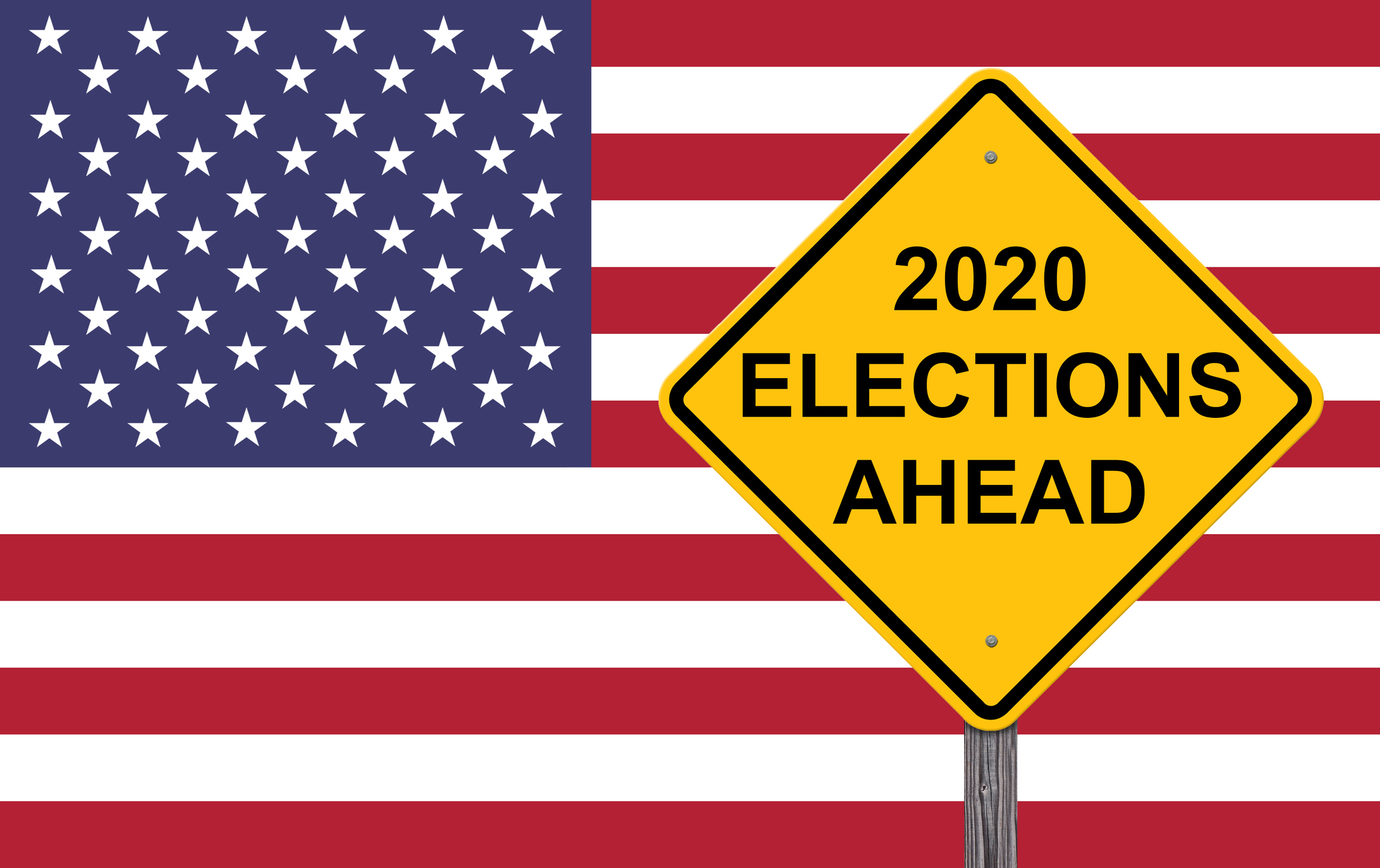 Love my country, love my city, love the democratic process, do not love my president . . . a blog inspired by the 2020 RNC [almost] coming to town

As Donald Trump continues to double and triple down on his defense of Confederate monuments, I’m reminded of a core principle underscoring my opposition to his presidency. Most Americans likely have issues that they want to see their candidates promote – and on the flip side, they have those things that they cannot abide. For me, racism in a candidate is a clear deal breaker.

If this statement gives you pause because it seems unlikely to find a candidate from a culture seeped in white supremacy (like ours) that has not, at least inadvertently, supported or enabled systems of oppression, I see your point.

But I want my candidates to be part of the solution to this national struggle, not aggressive perpetrators of the problem. It is incumbent on all people in the US who profess to believe in equality to engage in a full-throated, unequivocal repudiation of the shameful chapter in our history marked by a Confederacy that was inextricable with the immoral practice of slavery. That racist legacy currently manifests in our economic, educational, criminal justice, and social mobility systems. To live up to the ideals of our country, I believe we must commit to actively eradicate those lingering inequalities. A very first step in all of this should include addressing the ways the Confederacy is still celebrated and revered – especially in shared public spaces.

For painfully obvious reasons related to this issue, from the very beginning Trump was not my guy. Early in his career in NYC, Trump Management was named in a lawsuit by the Justice Department for housing discrimination. Staff for his show The Apprentice reported that he used racial slurs. After the Central Park 5 teens were exonerated, he refused to apologize for calling for the death penalty against them, and continued to insist that they were guilty. He made a name for himself in politics by promoting a racist and ridiculous “birther” conspiracy theory that questioned the legitimacy of our first Black president.

After arriving at the White House, Trump’s priorities continued to reflect this intolerant world view, as seen in his chaotic and unconstitutional Muslim ban executive order, and his immoral family separation/asylum-punishing border policies. (I really do care, do you?)

After the tragedy in which protestor Heather Heyer was killed at a “Unite the Right” rally in Charlottesville, it took several attempts for President Trump to condemn fully the violence of white nationalists, and only happened long after his VP, AG, and several senators had publically responded. His silence was deafening – and much appreciated by white supremacist groups. “No condemnation at all,” the Daily Stormer wrote. “When asked to condemn, [Trump] just walked out of the room. Really, really good. God bless him.”

He loves to fan the flames of bigotry, like when he recast the NFL players’ peaceful protest against police brutality as an attack on the flag and those who had served in the military (even though Colin Kaepernick was advised by a veteran friend to kneel as a sign of respect), and called those players exercising their First Amendment rights “sons of bitches.”

His divisive rhetoric took aim at “shithole countries,” and targeted female American citizens of color serving in our government with an offensive admonition to “go back” to where they came from (the Bronx?)

He scheduled a recent rally in Tulsa, OK on Juneteeth, combining the site of one of the most horrific massacres upon Black citizens in our country, with the anniversary of when the last enslaved people learned of their freedom. At this particular moment in our history, with citizens still reeling from George Floyd’s murder by police, this tone deaf celebration could not stand. After thunderous outcry, he ended up rescheduling.

A long-standing theory that “the cruelty is the point” with President Trump suggests that this rally snafu (like many other Trump exploits and rants) was more than just coincidence. I’m not completely convinced that Trump knows the historical significance of some of his insulting choices. But I can guarantee that his most influential advisor, who has remained by his side amid numerous staff turnovers, exits, protest resignations and firings, does. Stephen Miller is a proud white nationalist whose influence has helped to perpetuate incalculable harm.

Regardless of the intellectual foundation of Trump’s racist tendencies, his instincts are consistent and despicable, resulting in endless dog whistles piercing our collective consciousness. As the country marched and protested and cried out against racial injustice, Trump recently threatened via tweet (how else) to release “vicious dogs” upon rioters – an unusual suggestion, unless it was meant to evoke the history of police violence throughout the civil rights movement.

When I think of these dog whistles, and of actually releasing dogs as a means of pushing back on a struggle for equality and freedom, my mind goes immediately to a Civil Rights mission trip I took with my church last summer. Among our many stops was Kelly Ingram Park in Birmingham, Alabama, a site that commemorates the Children’s Crusade of 1963, when thousands of children participated in peaceful demonstrations against segregation. Images abound in this space that bring into sharp relief the pain and terror inflicted: police responded by spraying the children with fire hoses, beat them, and threatened them with police dogs. Hundreds of kids were arrested, filling the jails. The news footage of these atrocities circulated around the country and helped to fuel outrage that eventually pressured city leaders to agree to desegregation measures. 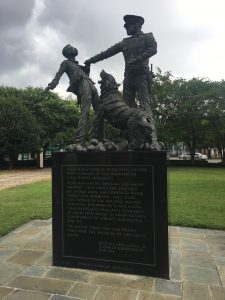 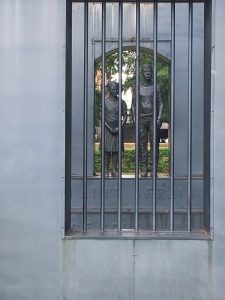 As our group later deconstructed these and many other searing spaces, it became clear that these issues were not ancient history to the Black teens among us. They bravely shared the reality of their lived experiences, an evolved but familiar story mirroring the pain of what came before. Today, as we contemplate the idea of defunding law enforcement, I remember one comment about the police in that discussion. Plaintively, quietly, almost just thinking aloud — and with profound sadness — one teen said, “I think the only way it would work, where we could be safe, is if somehow . . . the police . . . just didn’t have guns.” That calculus, stretching to try to accommodate and reconcile what was supposed to be, with the reality of what actually was, felt like a punch in the gut. How far my own experience was from this suffering; how far this precious child was from feeling protected and served. 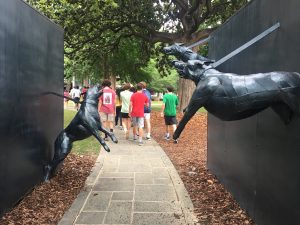 And how far I wanted to believe I was from images I saw on that trip. In exhibits at the Legacy Museum in Montgomery I confronted pictures of faces that looked like mine, spitting and screaming at children as they integrated schools. Innocents who were flanked by the National Guard, a necessary presence to keep them safe from people who looked just like me. I heard audio that sounded like me until it contorted with hate, women’s voices shrill and menacing, using vulgar language to dehumanize Black children and their parents.

As I took in the sprawling space that is the National Memorial for Peace and Justice, with its seemingly endless imposing monuments that each represent a county where lynchings occurred, I was forced to acknowledge the depth of the depravity that permeates our nation’s history. 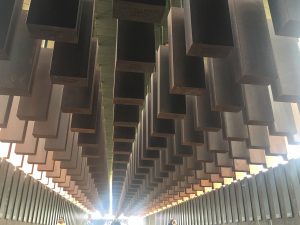 The shame and heartbreak came not only from the realization that lynchings were used as domestic terrorism to force people into submission to white supremacy, but that they were seen as sport by my people, who brought their children to picnic at the horrifying spectacle. Photos of those murders were made into postcards to mark the occasion, adding a final layer of repulsive injury to incomprehensible acts of immoral violence.

When I say that I want to see every last monument raised in reverence to this horrific history dealt with, I mean Every. Last. One. We should take a page from Germany’s book when it comes to how a country should acknowledge its history. We should never forget what happened; we can’t change it. But we should atone for it. At the very least, we should make sure proper context accompanies these structures, and provide an unflinching account of how these historical figures’ actions affected ALL citizens. If we’re unable to execute this idea effectively, the statues should be removed and put in a museum. (Charge admission. Put the money towards reparations.) Given the outcry proclaiming that removal would lead to  “erasing our history,” it’s highly ironic that in their current form these Confederate statues execute a most atrocious type of erasure.

And so. That is why my blood boils when President Trump defends these monuments, in a cheap play to his base. When he refuses to acknowledge the pain and harm they inflict and represent; when he revels in racist rhetoric; when he argues that we must protect our history.

I’m sorry. Whose history? That of “real” Americans? If we are going to laud the contributions of those who built this nation (figuratively/economically as well as literally), we would do well to be reminded of who that largely was. Spoiler: they currently don’t have statues erected in their honor all over the country.

To be clear, this is not to say that Democrats (or Joe Biden in particular), are beyond criticism where this issue is concerned. As Martin Luther King noted in his Letter From Birmingham Jail, “I have almost reached the regrettable conclusion that the Negro’s great stumbling block in his stride toward freedom is . . . the white moderate, who is more devoted to ‘order’ than to justice; who prefers a negative peace which is the absence of tension to a positive peace which is the presence of justice.” Democrats must not be complacent enablers of the status quo. Democratic candidates must not take the Black vote for granted; it must be earned by clear, decisive action to remedy issues of racial disparity and injustice. Biden’s history is imperfect – and includes past support of a crime bill that contributed to mass incarceration, his treatment of Anita Hill, his gaffes. But like our country, he seems capable of evolving. It should be instructive and humbling to all white Americans that many of our Black counterparts have extended a measure of grace to Biden, noting his failings but also his strengths, as evidenced in his selection as VP by, and subsequent relationship to, Barack Obama; and his securing the current nomination thanks largely to the support of Black voters in our country.

The promise of this great nation is embedded in righteous ideals of freedom and equality. But to realize that dream we have to keep striving to uphold our end of the deal. Joe Biden’s work is not done, the Democratic Party’s work is not done, and neither is yours or mine. We may start with putting away reverential signs of the Confederacy, like its monuments and its flag, but that is just the beginning. We must commit to keep at it: today, tomorrow, November 3rd . . . and every day that follows, until our “self-evident truths” are held unimpeded by all Americans.

DO JUSTICE: Read, watch, and DO THIS